Made in about 2 hours for training.

This game is not sold, will not be sold, I don't plan on making any money from it. It's a meme game based on current trends.

I need to make more of those :o

Great job! I had fun playing this game but there were a few bugs/issues I found
1.) sometimes when I would collide with an enemy I would glitch through a wall (don't know if that was intentional).

2.) when there were only a few Pac-men left it became more harder to find the others so I would suggest some sort of mini map or since this is a battle royal, some sort of "storm".

Other than that I would say you have done a great job combining an old retro game with some modern trend into it and I hope you the best with development!

This took me like 2 hours to make :p it's still a demo, so I'll fix bugs tomorrow and maybe add a few features! 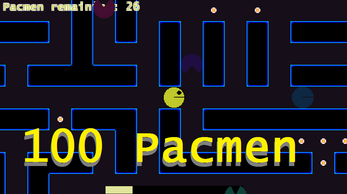