You are the SACRIFICE for a ritual that aims to please the EASTERN GOD.
They've put a CURSE upon you which forces you to MEET YOUR END.
You can NEVER GO BACK.

Controls:
WASD/arrow keys: move
F4: toggle fullscreen
If you play the HTML5 version, remember to click the screen to start.

The full OST of the game can be found here:
https://adriendittrick.bandcamp.com/album/jq8-curse-of-the-eastern-god

As usual, huge thanks to Elaine Tso, my one and only patron :)

That was really nice , good job

This is great. Thanks for making it!

thanks for playing it :)

Really cool! Found it on reddit and enjoyed it.

Thanks a lot for playing :D Consider sharing it to your friends!

I really enjoyed the game. It was more comical than horror

So. This compo game was QUITE AN ORDEAL. This is a game where your screen can ONLY GO RIGHT. And you can NEVER GO BACK. Try rating it here: https://ldjam.com/events/ludum-dare/43/curse-of-the-eastern-god

First of all I would like to thank youtube and its large selection of video game music which gave me inspiration to compose for an entire day. Half those themes are shameless plagiarizings of existing themes (such as OST from Ghots N Goblins or that one professor oak song) others are remixes from songs I already composed in the past, albeit with a NES VST. Each theme took about an hour to make, and composing music is what I did for most of my saturday afternoon.

Then on sunday I started coding and well, I had a story to tell. I hope I told it right. It practically wrote itself as I was coding, the EASTERN GOD whispering arrogant thoughts into my mind. My modus operanti here was finding situations which would force the players to try going left, for them to only realize that it’s impossible and that they are to remain UNFULLFILLED. (i.e that first chest you can never get.)

The second area is a bit of a lotus eater machine, you can have infinite time and infinite money but you eventually decide to make your way towards certain doom. This area contains advances corporate slave AI. Then the conversation with the EASTERN GOD happens. I was already starting to feel sleepy when I wrote this (only 5 hours remaining on the compo) so it really was a conversation between me and that video game god. We were both torturing each other with words and code, hoping the other would give up first. I guess I won in the end?

The third area was supposed to feature a scientist who found a revolutionary way to revert time (a.k.a GO LEFT) by exploiting the offspring mechanic. However, this was only 4 hours before the deadline and I HADNT CODED AN OFFSPRING MECHANIC YET. So they person just turned into a generic lone old person (haven’t decided on their gender) who tries to keep you around for tea or something. No good ending, just the impending void.

Speaking of the ending, I started to crack up and so did my writing so there you have an eldritch god feeling completely underpowered in the face of the eternally-resurrecting player who insufflates his life force in this world.

I hope you’ll have as much fun playing this as I did making it ;) 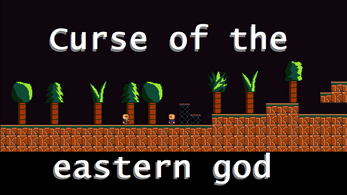