The theme was "Out of control", so I made a game where the main character has a simple stealing mechanic but where you can steal metaphysical concepts and identities. The game's numbers and setting spiral out of control through 5 different phases:

This is a hybrid between a puzzle game and an RPG. It has similar mechanics to a simple turn by turn RPG, with the main mechanic being that you can steal the enemy's move/HP/identity. However, you should approach it like a puzzle game, because you must figure out the best battle order to maximize your stats and abilities.

All coding and art were made during the allocated jam time, the music was composed before the jam, as allowed.

me uh uh into the ground you manhole

Love the game! I think I crashed it though - music is still going but the screen has gone black and unresponsive.

I had the moveset of Pummel, Copy, and Close, and I was up against a Stop Sign. The Stop Sign used Stop on my Pummel. I used Copy to use Stop on their Stop move (turning it to a Go move).

The Stop Sign then used Go to return their Go move back to their Stop move. I wondered what would happen if I used Copy. I tried it, and the text did get to the point of describing 'You use Copy. You use Go' but then, like I said, black unresponsive screen.

ahyeh i need to fix that

This is actually one of if not my most favorite game for the 2020 GameJam. I am surprised this game isn't further up. I really hope this gets worked on more and can be expanded. That's not to say this game is without it's flaws tho.
---FLAWS---
1. The randomness really makes the game better in most cases, the true last phase completely ruins it. While I understand the idea is to defeat the 3 lesser gods to defeat the final god that doesn't excuse the fact that it is stupid annoying. Power god can 1 shot you if he does boost then his attack (I forgot the name). Healing God can 1 shot if he uses his attack and Special God is just plain annoying.

2. There is literally no point changing your ID. Excluding being forced to change your ID on bosses. Out of the entire game the only point where you ever have to change your ID is in the 2nd level of Political life, where you have to become the plane to get across the water.

3. There really isn't much replayability, sure you can try a variety of different sets but it's literally impossible to beat parts of the with just any move. On top of that, once you beat the game every way possible there isn't really a reason to ever play the game again.

4. The final god bossfight is literally the easiest fight in the game, I mean sure you could try to beat it without the other 3 god's powers but from my playthroughs that is impossible. There is literally no point to the fight.

1. For the power god, change boost to a different special move. For the healing god, i'm not sure. For the special god, you could change Fenir to change every move except for the previous move into GO. Or for all 3 you could make it less likely they uses their respective god move.

2. Give every (or at least some) enemies a unique feature that allows you to a certain thing you could not previously do. (Like how planes can fly) The make it required to change your ID into something else to continue.

3. While i'm not entirely sure, I do have some ideas. You could add a Hard Mode where it's like before the update (Stealing half HP and not able see what the enemy does next). Adding some form of endless mode or even adding optional stuff like collectibles and achievements.

4. Make thee boss's moves unable to be turned into go and give other (new) moves instead of just everything be instant kill, maybe for a good twist even make it so it attacks first instead of you.

Overall, this is a really fun RPG game with a very unique twist but I would really like to see these things fixed/changes and just have the game be generally expanded. Also if you want, I personally really would like to help with this game or even just modding the game. So if you don't mind, consider either sending me current source code on either Discord (UltraNinja#1666) or via e-mail (superultraninja11@gmail.com). or updating the source code you have for download.

Boost is broken. ended up getting 100 damage
Also not sure if its the end of the game but after the citys i get stuck with nowhere to go.

Boost is actually working perfectly as intended :)
after the city you have to defeat the mayor to progress. He's in the third city map. Also, you eventually need to steal the ID of a plane to cross water.

When you beat a "world boss" you're given no choice but to change ID which moves you to the next world, other than that it's mostly aesthetic other than one point halfway through where you must take the ID of a standard enemy to be able to continue.

This game is pretty simple but it's really cool. I just think the end is reeeeeally bad. Like, it's the idea of it is really cool, but the execution basically relies on luck entirely!

When I FINALLY got extremelly lucky and got Nidhogg and Jormungandr, getting Fenrir is super easy, but then! I used fenrir on The Almighty, he unlocked one of the "GO"s, I used Nidhogg and guess what? He used the only Ragnarok he had! It took me like, half and hour to get to him and when I finally do, this happened?! Sorry but I had to rage quit the game at that point.

Still, the concept is really cool, and seeing how absurd things start to get is pretty fun, I just wish I could see the ending.

sorry! It will get easier in the post-jam version :)

I had  bug. 2 enemies attack me at once and after the first battle second started but after my attack game freeze

woops, will have to fix this in the post-jam.

Been thinking more about my issues with the game . I think the main problem is in the latter half, there's no strategy. Or rather, any strategy other than the intended one will get you killed. I gave up after the final fight one shot me (I had the moves but often instinctively double click going into battle and accidentally clicking a move I didn't mean to) because the final fight wasn't even a fight, there was no strategy, just "do the one thing that is guaranteed to kill him", more of an easy puzzle than strategy. Not to mention if you take a wrong path you have to grind up all over again. Like, why? It's not that I don't know what to do, but either I'm locked in with a bad moveset and it's just a case of RNG, or I've got the moveset and it's just a case of doing it despite how mindless it is by that point.

Sry if this comes across as harsh, but this game has an enjoyable factor that mean all the issues are so much more bitter.

yeah, the post-jam version will have better balance :)

Thanks a lot for playing <3

A few quality of life improvements:

1) Speed up the fights, especially getting to the post-fight picks (or give the option to). The Space phase became a bit of a drag because of the number of trivial fights and how long it took to get through them, bearing in mind I could one shot the enemy.

4) The final phase could perhaps be more puzzley. I beat it eventually, but it was more the compounded luck of my enemies' move picks than a particular strategy on my part. On some level, there's a sense that you should be tackling the enemies there in a particular order and taking particular moves off them, but the encounters are still more defined by luck than judgment. The final enemy, especially, could maybe use a design pass. My strategy involved a highly effective form of the stopping mechanic, but why does the AI opt to 'Go' twice in a row when it's got a winning move available?

Those are all very good points, I'll definitely do all that in a post jam version :)

Also I was planing on easing the grind by making you steal all HP instead of just half.

This games really great, but there's two major points against it.

1.RNG, its best to just take on tough enemies and hope they don't use their strongest attacks at the start, in part because

2.It feels like there's always one intended path, and if you don't take it, you're screwed. After grinding for way too long, I decided to keep boost incase we ended up with a numeric damage attack. Then the sun 1 shot me cos I didn't divide its HP and all that time was wasted.

The sense of scale was great but now I leave it feeling like I just wasted my time for trying to be ambitious.

most encounters can be cheesed :) for instance, you can just steal "magnitude" from one of two planets (Jupiler or Youranus) and then use it twice on the sun.

Cool premise but a bit tedious to play at the start.  There's probably more to the game but I don't have the patience to grind there.  Great presentation though :D

The concept of taking over the identity and abilities of opponents you defeat is very clever. I did find it a little more grindy than I’d have liked though toward the end. I guess it wouldn’t be an RPG without that haha

Fantastic game, but found a bug; I used Go to get a move back after using Land and the enemy Recycled it which crashed the game.

The graphics are exactly in the theme that I like, the music is very pleasant and this principle of play is very interesting! Only downside, we can not play this game with a controller.

Sorry, it would be kinda hard to implement too since I use mouse controls :p

Also unfortunately I don't own a controller, so I wouldn't be able to test it. 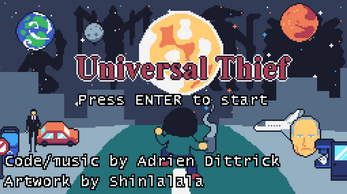 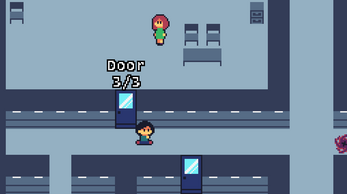 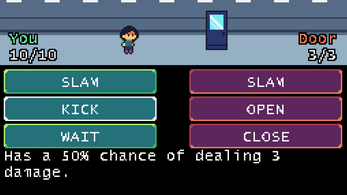 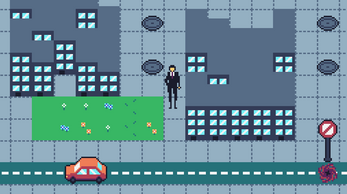 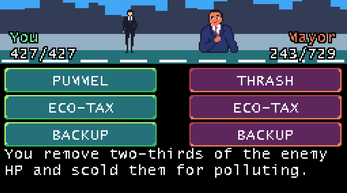 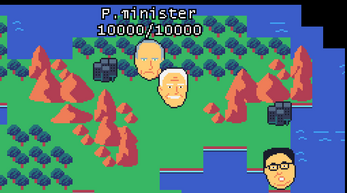 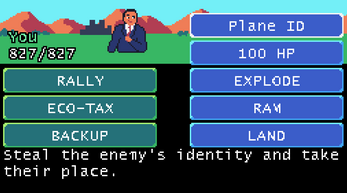 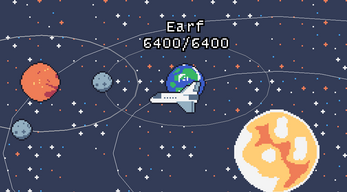 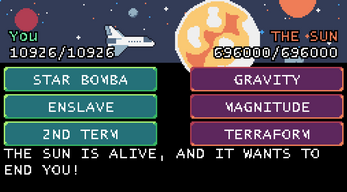 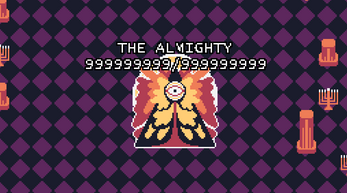